Home > Your Teen's Health > If Your Teenager is Feeling Suicidal 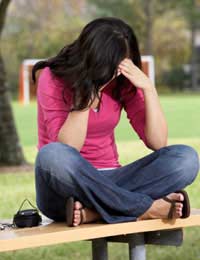 Whenever we read about a teenager committing suicide it seems like such a waste of a life. There’s no good suicide, of course, but for a teenager, with a full life ahead of them, to end things that way seems especially tragic.

For parents of teens it can seem particularly desperate. Might your own teen be suicidal? How would you know – many parents say they never saw any real indication that their teens were on the edge of killing themselves. Most importantly, how can you make sure it doesn’t happen to your teen?

Why Do Teens Commit Suicide?

No one knows the complete answer to that. But teens these days are under huge pressures, far more than previous generations, to succeed young and juggle school, work, relationships, family and free time. The greater the pressure, the more some of them can feel isolated.

It’s been estimated that 1 in 12 teens seriously considers suicide at some point, although for the vast majority the feelings are brief and not that strong. Some speculate that teens who live life at a distance, spending much of their free time online, might not see suicide for the very real danger it is.

Ultimately, depression, stress, conflicting emotions and other factors can combine to make a teen feel suicidal, but they aren’t really the causes of suicide as such. There might, in some instances, be an event that acts as a catalyst to send them over the edge. But it can often be impossible to predict a teen will commit suicide. All too often the real cause of a teen’s suicide will never be known.

How Do You Spot Dangerous Behaviour?

The short response is that all too often, you can’t spot dangerous behaviour. You teen might seem depressed, and in some cases might be under treatment for depression. But you can’t see inside their minds, you can’t know exactly what’s going on. Often suicidal teens don’t display any behaviours that seem to mark them out as especially at risk.

That doesn’t help if you’re the parent of a suicide. You inevitably blame yourself and think if you’d done this or that, the event might never have happened. Maybe it wouldn’t, or maybe nothing would have been different. You can never know, and that hurts as much as anything.

You can’t ignore the idea of suicide and hope it will never happen. It may just be a tiny minority of teens who do go on to commit suicide, but it’s a topic that needs to be addressed. Point out that some teens do consider it seriously and go through with it, and discuss why you think they might, and ask your teen why they believe anyone would. It’s not perfect, by any means, but it means the topic has been raised and can be discussed again, once it’s out on the table. One thing you can do that’s always well-received is praise your teen. All too often we’re ready to criticise, but not as fast to say good things to them. Just like the rest of us, teens need positive reinforcement – it might make all the difference if they believe they’re appreciated.

If you’re worried that your own teen might be considering suicide, you need to discuss it. Asking straight out might not bring a true answer. You need to approach the subject a little more obliquely. Say that they’ve seemed down, and ask what’s been going on in their lives to make them feel that way. If you know of specific events, ask how they feel about them.

Teens may well say that parents can’t understand their feelings. They may be right, they may not. But you have to try to empathise. Ask if they feel as if things are truly bad, and whether they’ve ever wondered if killing themselves was an answer to their problems. If they say yes, ask if they’ve considered suicide, and if so, have they thought about it lately.

If You Think Your Teen Is Suicidal

You might have misread the signs, and there’s no problem. But it’s better to be wrong and have taken action that to wake up and discover your teen has committed suicide.

When Your Teen Has Acne

Helping Your Teen with Depression
Share Your Story, Join the Discussion or Seek Advice..
It's vital to seek help if you feel your teen is suicidal. They might not appreciate it at first, but if it prevents something tragic happening, it's worthwhile. and remember that as a parent you need help in situations like that, too. Most of us simply aren't trained to deal with those kind of situations. But at the same time, don't act too quickly and misread those sullen times as something leading to a suicide attempt. It's a fine line to walk, I know, but when in doubt, err on the side of caution. It's better than the alternative.
Donna - 6-Jun-12 @ 10:19 AM
Title:
(never shown)
Firstname:
(never shown)
Surname:
(never shown)
Email:
(never shown)
Nickname:
(shown)
Comment:
Validate: