Getting Your Teen to Clean His Room 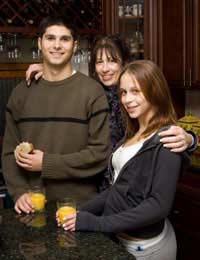 What is it about teens and cleaning their rooms? Yes, some do a great job, keeping everything impeccably, scarily neat, but the vast majority don’t seem to care. Boys are probably worse than girls, but plenty of both sexes seem content to live for a few years in a pigsty with clothes and everything else thrown all over the place.

You want them to keep their rooms somewhat tidy – before it becomes a health hazard – so how do you get them to actually perform the task? It helps if they’ve been encouraged to it from an early age, but even those good habits can fall by the wayside in adolescence.

However, there are certain things you should be able to expect – and you should be willing to forgive a certain amount of clutter; after all, it’s a teen’s room, not a barracks.

It’s worth laying down some basic rules for your teen about what’s acceptable in keeping the room clean. Point out, first of all, that they’re only responsible for their own room, not the whole house. Tell them that you’ll supply clean sheets, but they should be changed weekly, and that you expect the floor to be litter-free.

Eating in the room is fine, with the provision that all dirty dishes have to be returned to the kitchen on a daily basis. As to laundry, be willing to wash it as long as they bring it down – provide a laundry basket for them – and they have to put away their clean, folded clothes. After the first time they run out of clean clothes, they’ll never forget again!

That gives them responsibility, but also a certain level of independence, which is important in the teenage years, and their room should rightly be largely their domain. It also takes the onus off you, but don’t remind or nag them about things unless it’s absolutely necessary.

What do you do, though, with those who simply won’t do what’s expected? You have two possibilities – the carrot and the stick.

It can be much better to praise, or even bribe, your teen into cleaning his room than exerting discipline, which becomes another conflict at a time that’s full of them. Offering chore money often works well, especially when the teen is broke; just don’t be extravagant.

When a room’s been cleaned, praise them for a job well done, and make them feel proud of it (in reality it might not be much, but make them feel as if it is). Positive reinforcement can be a surprisingly powerful tool. Offer to take them shopping for something for the room if they’ll clean it first. That’s especially useful when they’ve had their eye on a small piece of furniture or a poster.

Berating a teen for constantly failing to clean his room simply isn’t productive. You might well hear, “It’s my room,” and when you respond “It’s my house and my rules,” all that’s going to happen is an argument, which does no one any good.

But there are things you can do. Refuse to give pocket money until the job has been done, or, if they’re hoping for a lift somewhere, refuse because they haven’t done as agreed – and don’t be put off with “I’ll do it when I get home”; that rarely turns into fact.

Threaten those kinds of punishments as a last resort. But if you do threaten, always follow through if they don’t clean their rooms. Leave the threat empty, and the room will stay dirty.