Home > Teen Behaviour > Is your Teen Addicted To The Computer? 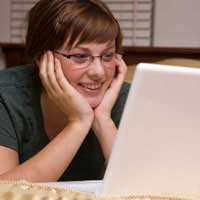 Computers, especially those with an Internet connection, have become a part of modern life. Every day teens use them to do homework, research, keep in touch with friends, listen to music, watch television programmes and movies and generally entertain themselves. But when is enough enough? How do you know if your teen has a healthy interest in electronics or has become addicted to the computer? Continue reading for some clues to help you determine if your teen’s computer use has become addictive.

Do you know why your teen is using the computer? If you ask your teen, will (s)he tell you? These are two questions that any parent should be asking in regards to teen computer use. As a general rule of thumb, teens who can immediately and articulately describe why they use the computer usually do have a reason to be on them. However, teens who are vague or secretive about their computer use may have no reason to be on the computer other than because they are addicted or fear living their life away from the machine.

In addition to using the computer, can you think of activities that your teen enjoys and engages in regularly? If so, then it is likely that your teen has a fairly balanced life. If not, then it is likely that your teen is sacrificing or otherwise missing out on a well rounded life for the sake of spending time on the computer. Though extra computer use may be acceptable at certain times (for example, during school holidays), in general it should not take up so much time that it precludes a teen from engaging in other activities.

In general, teens love technology and a computer has become a fact of life for these youngsters. If you fear that your teen has become addicted to the computer, think about the time (s)he spends on it, the purpose for which (s)he logs on, if (s)he engages in other activities and who (s)he counts as friends. These variables usually give parents a well-rounded picture of a teen’s computer use and enough information to decide if their teen seems to be addicted to the computer.

Counselling with Your Teen

Dealing with Teen Moodiness
Share Your Story, Join the Discussion or Seek Advice..
Internet addiction is being treated in countries like Korea, although some contend that it’s not really an addiction. However, as it takes up more and more in the lives of teenagers (and adults) it does seem to be a mental, if not physical addiction, one that can require treatment in extreme cases.
Tina - 3-Oct-12 @ 10:58 AM
Title:
(never shown)
Firstname:
(never shown)
Surname:
(never shown)
Email:
(never shown)
Nickname:
(shown)
Comment:
Validate: