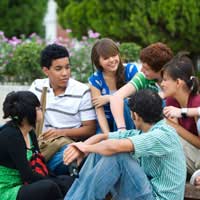 Peer pressure can be a formidable force whether it comes from specific individuals or general pop culture. However, by discussing pop culture with your teen you’ll not only be opening the channels of communication between yourselves but can seize on the opportunity to bond over some of the cultural developments as well. As long as you use these discussions to reiterate your family values there’s not much more that parents can do. At some point teens need to go out into the world and deal with the pop culture of the moment. You’ll just have to be confident that you’ve taught your teen well and his or her choices will make you proud.

“Pop culture” is a term that is used to mean popular culture. That is, the popular items such as books, films, fashions, sports, music, foods and more that are popular at a given time. These items are usually circulating widely around the community or country so they are readily recognisable for those who are up to the minute about trends.

Discussing pop culture with your teen can be tricky simply because it moves so quickly. Just when you think you know the names of a popular musician you’ll find out that someone else has come up and taken his or her place.

By the time you have a chance to watch a film on DVD there will be another blockbuster raking in millions at the cinema. Don’t let the fear of being outdated stop you from having important discussions, however. Admit to your teen that you may not be up totally au fait with every aspect of pop culture, but that there are certain aspects that are worrying you. This will give you the perfect platform to begin a general discussion, whether it be about drink, drugs, teen pregnancy, women’s fashions, violence or anything else that is on your mind. In fact, staying general may be helpful because it will allow you to ask your teen for more specifics. These answers can illuminate much about your teen’s life and the cultural within which (s)he lives.

Bonding with your teen through pop culture may seem like an impossible task, but all it takes is some time and effort from both sides. For example, asking all family members to engage in a once-a-month film night or beginning a discussion about favourite books while on a car journey will help you stay in touch with what your kids are seeing and doing. Sometimes getting a little silly or allowing your teens to laugh at you can help keep a conversation going. Play them some of your favourite teen songs or show them pictures of you in the height of fashion when you were a teenager. By building a bridge and showing them that you are interest in give-and-take, not just lecturing, you’ll be more likely to keep your teen engaged.

When you are on the topic of pop culture is the prefect time to reiterate your family values. For example, discussing teen drinking gives you a great opening to remind teens that responsible drinking by those who are over the legal age is perfectly acceptable in your house, but that binge drinking and underage drinking is not. However, it is a fine line between simply stating your rules and lecturing them so be forewarned that teens may well tune out if they hear your tone change or suspect that you re going to tell them a list of things that are prohibited. Asking their opinion on matters, such as “That last film we saw was pretty gruesome. What did you think of the drug scenes?” will help keep them involved and show them that you think their thoughts and opinions are worthwhile. The more the two of you can interact the more you can both learn about pop culture and your family culture.

Pop culture and your teen can be a scary but exciting relationship. As a parent, watch how it develops and step in when you feel that it is needed. Good luck!

Counselling with Your Teen