Home > Teen Behaviour > What to do About Teenage Rebellion

What to do About Teenage Rebellion 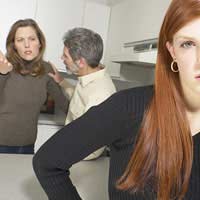 Teenage rebellion is a part of growing up, of establishing independence and signaling that your teen isn't a child any more. To a greater or lesser degree everyone has done it.

It maybe be that one day the child you thought of as sweet comes home looking punk or Goth and all you can do is stare in shock when they ask what you think. It's their rebellion, or at least one facet of it. It could be the same with a change in musical tastes, and behaviour.

Teenage rebellion is a rite of passage, a movement from childhood to the adulthood, a way of establishing an individual identity both within the family and in society. It can take many forms, from haircuts and a general look to an attitude that is often confrontational, especially at home.

After having once accepted the boundaries you've set as a parent, the growing child now needs to establish new ones, and part of that will be to see how far you can be pushed. A word of warning - after spending their whole lives with you, they instinctively know which buttons to push and what can rile you.

The best advice is to never let yourself react hastily, although that's not always possible. At some point your teen will wind you up beyond your patience and you'll explode. Its' going to happen. But as far as possible, keep control, however frustrating the teen can be.

Talk things through, and don't criticise the new odd hairstyle or clothes. Do they actually harm anyone? You might not like them, but are they really a problem in the great scheme of things? You'll have your battles during the teenage years, but pick them wisely, don't go after every little thing.

Of course, there are limits. When behaviour becomes dangerous - drinking heavily or drug taking - then you have to speak out forcefully, for the sake of the teen and your family. Otherwise, though, just be as patient, and as forgiving, as you can.

Your teen might still be your baby, but don't treat them that way. Once they're teenagers it's no longer cute, it's condescending. Treat them as adults, which is how they see themselves. It doesn't mean you have to be their best friend (indeed, that's not advisable, you need that distance), but don't talk down to them. Discuss issues sensibly and sanely, treat their opinions with respect.

There's no hard and fast time when the rebellion sets in, or even what form it can take. Rather than being taken by surprise when it arrives, though, expect it to come and keep your eyes open. That will certainly help your patience when it all bursts forth.

Remember, your teens are trying to find their place in this world, and pushing against things and people is a way to create space and be noticed, to establish who they are. In other words, they're even more confused by all this than you are.

For what it's worth, this is just a stage or phase and it will pass, although it can seem endless when they're going through it.

Behaviour can be a problem. They'll be more argumentative and very defensive or their positions and who they are. Accept that, and where possible try to avoid confrontation. In the end it serves no purpose other than to push the two of you further apart.