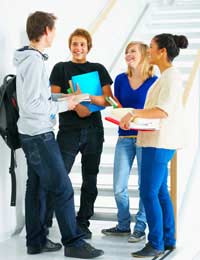 Very often teenagers will suddenly feel strange around their friends of the opposite sex, even if they have lived next to each other for years or used to spend hours at a time catching bugs/playing football/building forts in the back garden. As parents it can be hard to see this awkwardness develop, particularly when the friendship had previously been a strong and supportive one. Rather that passively allow your teen to drift apart from good friends, actively encourage him or her to maintain platonic friendships. If (s)he seems hesitant, discuss the many benefits of such friendships and see if there is anything that you can do to help the friendship flourish.

As a parent you might think that your input is not wanted when it comes to your teen’s friendships and this may be true, but it doesn’t mean that it’s not needed. Teens tend to be hyperconscious of what others think and this can obscure the bigger reality of a situation. For example, if none of their friends have platonic friendships then they are unlikely to remain best friends with someone of the opposite sex – even if it means foregoing a great friendship for no good reason. If you feel that your teen is caught in such a trap, casually ask about his or her most cherished platonic friendships. Even saying something as simple as “I bet Mary would like to go see that film” or “You should loan that book to John, he’d probably love it” may be enough to remind your teen of his or her friends. Such pointed hints also give teens an easy way out: if anyone questions them about interacting with a friend of the opposite sex then they can always say that you asked them to do it.

Discuss the Benefits of Platonic Friendships

If you’ve been making casual comments about a platonic friendship and your teen just doesn’t seem to be biting you may need to sit down with him or her and have an obvious discussion about the benefits of platonic friendships. Remind your teen that staying friendly with members of the opposite sex will give them an insight into how the other gender works including how they think, what they find interesting, what they consider important and what they definitely don’t consider important. A lot of these things might be a big surprise to your teen! Also, having a friend who is a member of the opposite sex means that your teen will have an opportunity to hear advice and opinions that none of his or her other friends may be able to give him or her. Finally, if nothing else works, remind your teen that a friend of the opposite sex also has a lot more friends of that sex…

Ask if There is Anything You Can Do

Your teen may not always ask you for advice when (s)he needs help, so go ahead and jump the gun – ask your teen if there is anything that you can do to help him or her maintain a platonic relationship. You may be rewarded with a shrug, but you just might find that is something simple that you can do that (s)he has built up to stressful proportions in his or her mind. Be patient because this may be a hard conversation for your teen, and always remind him or her that you just want what’s best and makes them happy. If you say it enough your teen just might begin to believe it!